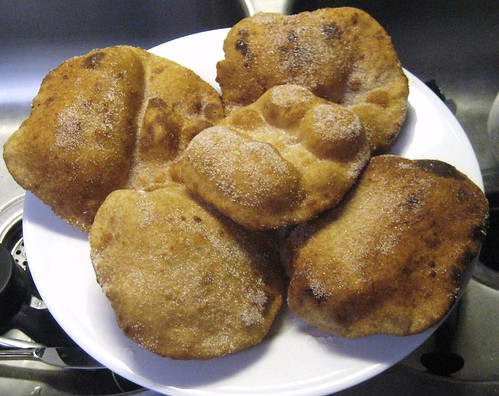 I would venture to say that not many people would consider Native American Fry Bread as a totem but I would disagree slightly.  A totem gives medicine or teachings in our lives and Fry Bread, to me, does have a lesson that we can learn from.

Many non-natives consider Native American Fry Bread as a traditional staple of the different tribal traditions of the Indigenous People of North America.  However, it was not until the 1800’s when the American people began to force the Native Americans onto the reservations that it even became a part of their diets. The rations that were given on the reservations consisted of flour, salt  and lard which was not something that the women were familiar with or used when feeding their families.

Fry bread was created out of necessity to keep the Native Americans from starving. It was a symbol of poverty and the humiliation of having to live confined to an area that was not their homeland. The Native American women began to feed their families with this fried bread by combining the flour, salt, baking powder and water and literally frying it in the lard. It became a symbol of survival.

Recently, my husband and I attended a Fry Bread Contest at the Eitlejorg Museum in Indianapolis, Indiana. It was a wonderful afternoon where different tribal representatives made frybread in their traditions for us to taste and vote on. We tasted Pottawatomie, Navajo, and Pueblo versions of this wonderful fried bread and heard the history of the bread.  They were all delicious and I would be hard pressed to decide which one was my favorite.

I came away that afternoon with “good medicine” with the lesson of survival and determination from those women of 150 years ago. They took ingredients that were so totally foreign to them and created a staple to feed their families, to save their children. Now, each time I make fry bread or eat frybread of another tradition, I will be thankful for the totem medicine of these women and I will honor their memory. Out of hardship they found a way to sustain life.  So, even though Fry Bread is not a traditional Native American Totem in the truest sense; it does give me a lesson and good medicine to live by.

Did this post resonate with you? Please feel invited to share your thoughts or experience in the comments.
Login
1 Comment
Newest
Oldest
Inline Feedbacks
View all comments

Such indignities for the Native Americans. My heart goes out to them, and I am in awe of their fortitude. In humblest respect.