Lessons Of The Moon Lodge

Since this is a month of the “blue moon” (which means that in the month of August 2012 there will be two full moons), I thought it might be appropriate to look at the lessons of the Moon Lodge. The main medicine that we get from the teachings of the Moon Lodge in our journey is that of retreat. It is time to take a break. Our influence can not be taken to heart by others because we need to replenish our own energy. In a sense, Moon Lodge, is a barren time. A time when we need to be alone and honor ourselves so that change can come.

Retreating should not be looked at as a sign of weakness but as a sign of strength. The future can not take hold in our present if we do not retreat once in a while. By resting now, we are preparing for a time of fertile action. Taking time to be alone allows us to do some things that we enjoy without interference.

There really were Moon Lodges in the Native traditions at one time. It was a special placed designated for the women to gather when it was their Moontime (menses). Their duties of family were removed during the time they needed to be in the Lodge and they were allowed to enjoy the company of their Sisters. No men were allowed in the Moon Lodge. Just as women were not allowed in the Warrior Societies. 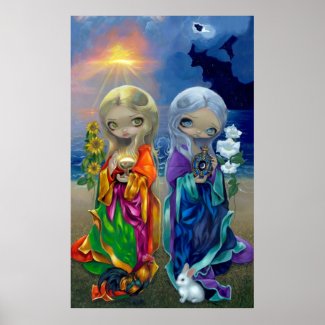 Sun Child and Moon Child by strangeling at Zazzle.

Time spent in the Moon Lodge was a time to rest, to share experiences with the Sisters of your Tribe, and to honor your connection with Earth Mother and Grandmother Moon.

Moon Lodges were sometimes called “Black Lodges” not because there was something sinister or evil about them because that was far from the truth. They were places for Sisterhood and a place to share the visions, dreams, experiences, and talents with those of their own gender. They were the center of Woman Medicine and the unity of Sisterhood. Why Black, then? Black is the color of the West on the Medicine Wheel. West is the place of woman. It is the place of all of our tomorrows. It is also the home of Bear. Bear retreats into a cave to digest the information and food gathered over the year. A Woman retreated to the Moon Lodge to honor the gifts she received from the Earth Mother during the past Moon. Grandmother’s silvery light dominates the black sky and her light is female in nature.

If you were drawn to this message today, it might mean that it is a time for you to retreat into your own Moon Lodge. Take a break, energize yourself, and prepare for a fertile change in your life.