Careful, You Are About To Be Tricked Into Some Knowledge Are you feeling like Coyote is trying to tell you something? Well, he probably is but it may not be in a way that you will appreciate as his message will come in the form of a trick. He is the ultimate in pranks that often show us the folly of our ways. He will make us laugh, although sometimes in a painful way; but he always teaches us a lesson about ourselves.

I am going to flat out admit that in the past I have been a little prejudice against this sacred animal spirit. Perhaps that came from the fact that I don’t particularly like to be tricked, as I’m pretty sure most people don’t. I have consciously passed over sharing the lessons of coyote because I just felt a little repelled by the animal. That was unfair and probably a way for me to live a little longer in denial of the importance of his message.

In the last few weeks, I’ve been drawn to this animal totem and finally got the message that I have some work to do. I also got the strong message last night that someone else who reads my blog needs to hear what we learn from the Coyote totem.

Just like that funny cartoon character, Wile E. Coyote; we all from time to time do things that are self-destructive in nature and we usually don’t see what is coming from our actions. Kind of like when the coyote of the desert tries to catch the Road Runner by using dynamite and he doesn’t realize that he is going to blow himself up in the process.

When Coyote comes to play in our daily lives, we need to ask ourselves some questions. What are we really up to and most importantly why are we up to it? Are we playing jokes on ourselves? Is there someone we are trying to fool or is someone trying to deceive us?

Perhaps we have been conning ourselves and all around us into believing that we really know what we are doing. We’ve played that trick so long we have become tangled up in our own machinations. So, here is the thing, we need to stop and look at the acts of self-sabotage as the tricks that they are and find some humor in it all. That is right, laugh it off and change your course. Recognize the silliness that you have created, wipe off the dust and move forward. Coyote comes to us when things have gotten entirely too serious. We have to learn to laugh at ourselves or we lose the game. The real medicine is laughter and joking around because through it all we can find new viewpoints and live a much happier life. Sometimes we need to do something silly just for the sheer joy of it. I don’t mean playing harmful tricks on people, but something fun and silly.

Once, I began to reflect on the magical medicine of Coyote, I realized that it isn’t something to push away but instead enjoy with a vengeance. Quit being so stuffy, don’t try to fool yourself into thinking you are something you are not, move forward with the whimsical and silly things that we encounter in life and grow.

Although, this book isn’t necessarily about the Coyote totem specifically, it is a good source for alternative ways to make our minds and bodies healthier. 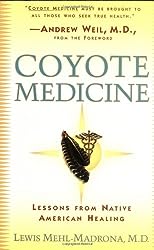 Coyote And The Ducks

One thought on “What Do We Learn From The Coyote Totem?”